St Helen’s Well was a much visited site for hundreds of years. Local people would collect spring water from it and also deposit offerings of metal pins. Destroyed in 1968, the well has not  been restored, but is now marked by a celtic stone cross and plaque. Both the story of the well and its rebirth as a cross site are intriguing.

Baines in his 1836 history of Lancashire, quotes at length Richard Kuerden’s description of the well from 1675. Kuerden writes “Over against Swansey House, a little toward the hill, standeth an ancient fabric once the manor house of Brindle, where hath been a chapel belonging to the same, and a little above it is a spring of very clear water, rushing straight upwards into the midst of a fair fountain, walled square about in stone and flagged in the bottom, very transparent to be seen and a strong stream issuing out of the same…”. Kuerden then goes on to write disparaging remarks about the local people who visit the well each year on “St Ellen’s day”. St Helen’s  was a pin well, so locals were presumably visiting on the saint’s commemoration day and depositing a pin as an offering.

Water from the well was later used to supply Well Fold farm, and local people would visit to fill up their bottles. Well Fold farm is long gone, but there is a Well Fold Close named after it, near to the modern day celtic cross. 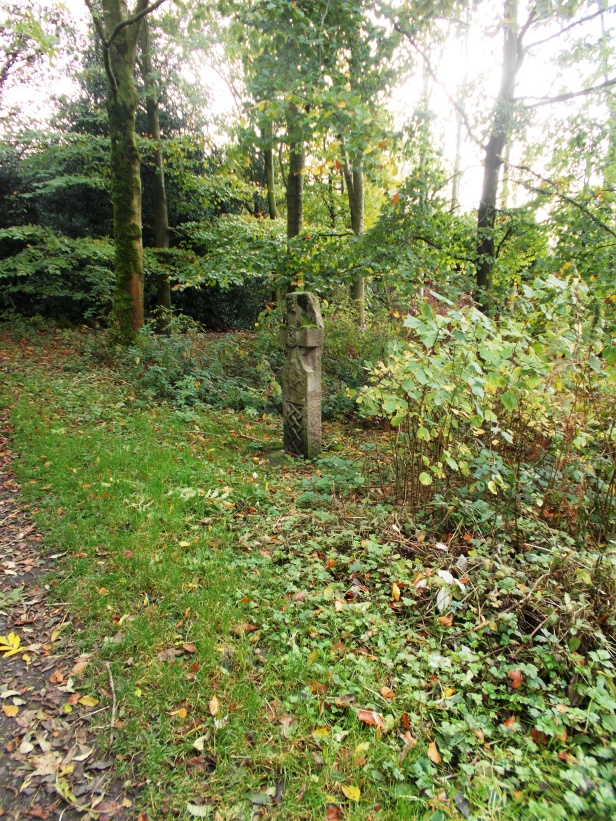 Henry Taylor  visited the spot in his huge survey of all the crosses and holy wells of Lancashire, publishing a volume on the Leyland area in 1906 . He described the physical structure of St Helen’s Well as a pair of stone openings, roughly square shaped. One measured 6 foot by 7 foot, the other was 7 foot square. Both were about 4 foot 6 inches deep. From the 7 foot square opening he noted that “water now bubbles through white sand, clear and sparkling“.

In the recent  update of his book published by the Catholic History Society, there is a reproduction of a photograph from the 1950s showing a woman looking at the well. In the grainy photo, the two distinctive sunken square shapes can be made out and the well appears to be fenced off. In 1968 the well was destroyed when the M61 motorway was built and the site all but lost.

In the early 1970s the surrounding landscape was transformed from wet grazing land by the planting of a small two acre wood. The exisiting hedgerow plants of alder, oak, holly and hawthorn were added to with hazel, birch, cherry, small leaved lime, field maple and exotics such as Norway maple and larch. Forty years on and Whittle Spinney is a pleasant place to walk through, and you can almost forget the rushing motorway traffic nearby.

Today at the far end of the wood towards Birchin Lane stands a modern celtic style stone cross marking the site of the well. Plans for a memorial to the well were first put forward in the 1990s, but lack of funding and permission hampered efforts. In 2003 a group of local people decided to erect a cross, which they duly did, but without planning permission or the consent of the land owner. Brindle Historical Society stepped in to negotiate with the owners, the Woodland Trust, who agreed to rent out the spot to them for a peppercorn rent, and the cross has been allowed to stay.

The cross is not the only reminder of the history of the area. Walking through Whittle Spinney today, its hard not to notice the huge lime kiln, still in excellent condition. The kiln used limestone from Carnforth and coal from Wigan, to make lime for the local area. Limestone was transported down the Lancaster Canal to this spot, but the canal has now been filled in and has all but disappeared. This section was the Walton Summit Branch and it passed through what is now our woodland site. It connected to the Leeds and Liverpool Canal via  Johnson’s Hillock  at Whittle Springs Basin.

So there we have it: a holy well much loved, a canal and its industry come and gone, a motorway constructed, a planted woodland grown up, and finally a cross and plaque commemorating the lost well of St Helen. Memories are long in Lancashire…

Parking: The site is open access. Park at the entrance to Wilderswood Close, just before the houses begin. There are also a couple of parking spaces at the far end of Osborne Drive. Look for the paths in to Whittle Spinney, with gateways marked as Woodland Trust. The lime kiln is near the Wilderswood Close part of the woodland. St Helen’s Cross is at the other end, near Birchin Lane and a path links to two sites together.

A History of the County of Lancaster: Volume 6, William Farrer and J.Brownbill (editors 1911)  http://www.british-history.ac.uk/report.aspx?compid=53074 (accessed 23/10/14). This contains the Richard Kuerden quotation, originally in Baines (1836)