Dalton Castle is a 14th century Pele tower and was owned by the abbot of Furness Abbey. From here he would administer the law in the region of the Lordship of Furness, Lancashire North of the Sands. There would have been an earlier timber framed building on the site which also contained a gaol and courtroom, but continual raids by the Scots in the early 1300s meant that it was a target of burning. Setting fire to property, robbery and the taking of prisoners were the main aims of the Scottish raiders in these lawless times. Despite abbot John of Cockerham paying money to Robert the Bruce in 1322, plunder and burning went ahead. The reason for such open hostilities was that during this century  England and Scotland were either at war, or maintaining an uneasy peace which did not stop raiding from either side. This lead to the building of  fortified Pele towers throughout the region, even as far down as Radcliffe Tower and Turton Tower in south Lancashire.

By  1327 the monks of Furness had a Pele tower constructed on nearby Piel island, which they would use for refuge during Scottish  attacks. It’s thought that Dalton Castle was constructed at the same time, as it shares many similar features (such as the window design). Dalton Castle was not for refuge  as such, but was clearly an important building that needed its contents preserving so that justice could be dispensed. 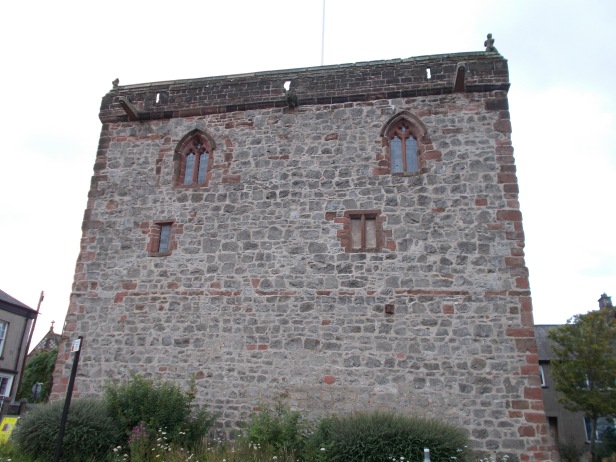 The original stone tower was built with limestone and red sandstone edgings. For security it had a single entrance on the ground floor leading to a guard room. From there a spiral staircase  was built into the west wall for added protection. The stairs led up to three more floors, the top one of which was the abbot’s courtroom. This had large traceried windows to let in a lot of light, but the lower floors would only have had defensive arrow slits for illumination. At the very top of the  tower was a parapet  with arrow loops. Below the ground floor was the dungeon which was accessed by a removable ladder through a floor grate.

During the 1330s the abbot’s power grew, meaning that he could preside over a larger range of criminal cases. These  included those involving bloodshed and he also held the right to appoint a coroner. He would hold an Abbots Court every three weeks that dealt with debt and trespass crimes, and a Full Court Baron session twice a year that could resolve local disputes.

In 1537 the last abbot, Roger Pele, surrendered the ownership of Furness Abbey to Henry VIII’s agents. Despite his taking part in the Pilgrimage of Grace (the northern protest against the dissolution of the monasteries) he was allowed to stay on as the Rector of Dalton. In the same settlement some of the recently unemployed Furness Abbey monks received a pension. Eight years later Henry VIII wrote to his royal officers in Furness enquiring about the condition of Dalton Castle. He knew that it was “now in great Ruyn and Decay to our hurte and losse”. He suggested that repairs could be carried out using “what store of stone, leade, timber and other stuffe we have within or about our late monastery there.” This was duly done.

Just over a hundred years later Charles II was looking to reward those who had helped restore him to the throne after the rule of Oliver Cromwell. One of those was General George Monk who was given the Lordship of Furness and the Manor of Dalton, and with it ownership of Dalton Castle. The king also made him the  Duke of Albemarle. After this, the Pele tower remained in the hands of local powerful aristocratic families.  From the Albmarle family it later passed to the Montagu family  and then to the Buccleuchs who owned it until 1965.

Over the years it has been modified numerous times, with stables being added on the ground floor at one point and some of the upper floors removed. It has also been a masonic temple (the Baldwin Lodge) in the Victorian era and an armoury for the Dalton Battalion of Rifle Volunteers. Throughout much of its existence though, it remained a court up until the early 20th century. In 1965 it was given by the Eighth Duke of Buccleuch to the National Trust, who are the current owners.

On visiting today, much of the original fabric of the building can be seen and it is in a very good condtion. On the ground floor is a museum room with lots of curious locally collected items. These include a stone head from Furness Abbey and a rare  Iron Age carved head.  The building is also home to the Henry Kellet Geology Collection and there are temporary exhibitions in the large room on the first floor. Many of the original features can still be seen, including  a look down into the underground dungeon.

Outside the tower today is a small plaque set in the ground. This gives the words of a charter that was drawn in 1239 granting the right of the abbot and monks of Furness to hold an annual fair from the 31st October to 2nd November:  “…on the day before and on the day and on the morrow of All Saints day, unless the fair be damaging to neighbouring fairs”.  Around the edge of the tower are grown Medieval medicinal herbal plants. A few steps away is the parish church of Dalton, and it’s well worth a look too.

Dalton Castle is in the quiet high street of Dalton and so the outside features can be seen at any time.  To view the interior, it is open on Saturday afternoons 2.00-5.00 pm from the end of March until the end of September. Admission is free. On street parking is available in the high street.

A History of St. Mary’s Church and Parish Dalton in Furness booklet (2007). Available in the church.