In early Victorian times Liverpool was in need of two new buildings- one for  an entertainment venue and another for  law courts. Two independent competitions were held to find an architect for these two schemes. Harry Lonsdale Elmes, a young architect, won both, quite a coup for someone who had only completed two previous projects. He then submitted a plan to combine the two buildings  all into one huge structure.

(This odd combination of uses has a precedent in the a building called The Tower, which was owned by the powerful Stanley family. For more about it, see our page on Liverpool Castle here). Liverpool city council accepted the design and the foundation stone of St George’s Hall was laid in 1838. Sadly, Elmes would not live to see the completion of the building. Suffering from stress and ill health, he took time away from work in 1847 and retreated to the Isle of Wight. In September of the same year he moved on to Jamaica in the hope that the warmer climate would help, but he died soon after of tuberculosis. Charles Cockerell, a friend of the Elmes family, took over in 1851 and although he followed much of the original vision for the exterior, he would put his own stamp on the interior design.

The building featured the world’s first air conditioning system. It was designed by the engineer David Boswell Reid, who would go on to create one for the Houses of Parliament. Fresh air was brought in from the eastern portico and then warmed or cooled as required, with the waste air then being released through the roof. Individual rooms had large canvas flaps that could be opened to let the air pass into them. 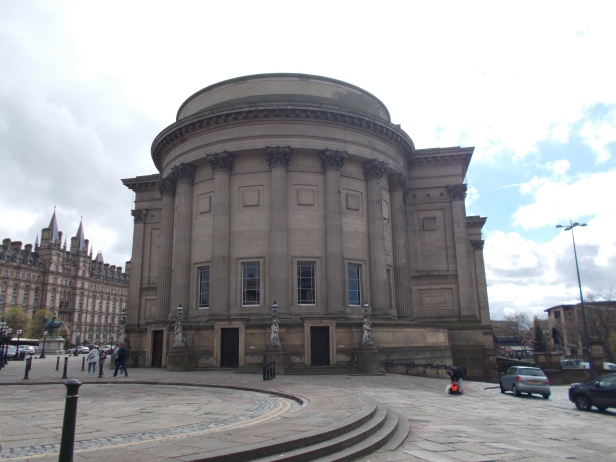 The Law Courts and holding cells were opened in 1851, but the rest of the building was a few years away from completion.  A crown court for criminal cases was at the south end of the building and a civil court for civil and family cases was at the north end. The fate of the criminally convicted was incarceration at the local prisons of  Walton or Kirkdale. If they were only 11 to 15 years of age then the detention ship in the River Mersey awaited.  The Clarence Reformatory Ship could hold up to 250 boys, and sentences might last 3 years after which some of the  boys could be sent into the merchant service. In 1884 a fire destroyed the ship and six of the inmates were convicted for the crime, each receiving a      5-year gaol sentence.

In contrast to the stark functionality of the courts and cells is the opulence and exuberance of the Great Hall. Elmes based his design on the Roman baths at Caracalla near Rome. Sets of bronze entrance doors for the Great Hall each have the letters SPQL on them. This is the Liverpool take on SPQR which is  Latin for Senatus Populus-Que Romanus  (The Senate and the People of Rome). Accordingly SPQL means The Senate and People of Liverpool. Above each door where we might expect to see the Roman Eagle, we have the Liverbird !

The key feature of the room is the spectacular sunken floor with its dazzling patterns of 30,000 Victorian Minton tiles. Produced at the Minton Hollins tile factory in Stoke-on-Trent, they are made by pressing different coloured  clay  into deep moulds to create the desired pattern for each tile. The floor was meant to be protected and not always be on view. In 1883  a removable sprung wooden dance floor was placed over the tiles. Today this tradition continues, with the floor only on show at certain times of year.

The barrel vaulted ceiling of the Great Hall is still thought to be the largest of its kind in Europe. Supported by huge red granite columns, it would have been prohibitively heavy, had it not been made with hollow bricks – an innovative idea at the time. Liverpool, Lancaster and the Royal coats of arms are displayed on it as is St George dressed as a Roman soldier fighting the dragon. Around the edge hanging from the prows of Greek ships are  ten chandeliers each holding 120 bulbs. 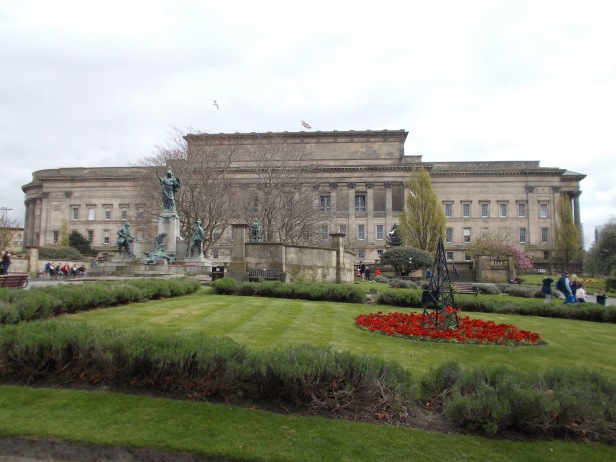 At one end is the huge pipe  organ with its 7,737 pipes  added by Cockerell – originally the largest in the country, it is now only the second biggest having been surpassed by the one at the Albert Hall. To make it fit into place two of the granite columns had to be removed, and these were later erected at the entrance to Sefton Park. It was played for the public every Thursday and Saturday by a Mr W.T. Best for 39 years and originally had steam engines to power the bellows.

St George’s also featured a room just for music. This was the Concert Room, often called the Golden Room and it sits above the civil court. It could hold a seated audience of 1200 and a stage big enough for an orchestra of 60 instrumentalists and 70 singers.

In 1855, the Great Hall and Concert Room were finally opened to the public. Two concerts were given to raise funds for Elmes’s widow and son. It had been the vision of Elmes that the hall be used for the “recreation and improvement of the working class” and for years it fulfilled that function. Many concerts, dances and banquets were held at St George’s over the decades. No one passing by outside could fail to be impressed by the sheer bulk of one of the finest Neo-Classical Grade I listed buildings : the massive Corinthian style columns, the imposing human figures on the panels above, the four stone lions guarding the whole building and the dolphins bearing the many street lights surrounding it became a hallmark of Liverpool civic pride for over a hundred years.

Towards the end of the 20th century, St George’s Hall had fallen upon hard times. It stopped being used as an entertainment venue and in 1984 the courts moved to their new location in Derby Square. For years the hall remained closed and its interior began to deteriorate. In 1990, Prince Charles started a fund to help make part of the roof of the Concert Room waterproof again. 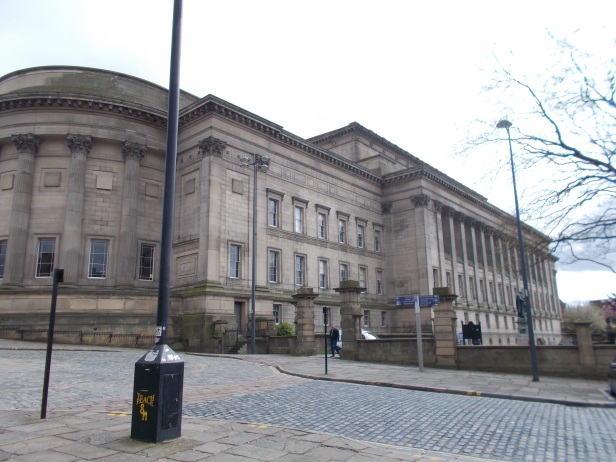 As part of Liverpool’s bid to be European Capital of Culture, restoration of the hall came back on the cards. In 2006,        2.3 million pounds of funding secured from Europe and the Heritage Lottery Fund meant that it could be properly restored. The organ alone cost £500,000 to fix. The grand reopening took place in 2007 by Prince Charles and St Georges’s was the centre piece for the Liverpool Capital of Culture opening ceremony in 2008.

Today there is a Heritage Centre for visitors and  a historical  trail around the buiding. You can go into the Grand Jury Room which has one of largest docks in Europe so that Victorian gang members could all be put on trial together ! From within the court room you can descend the steps to the cells and still see prisoner graffiti on the walls.  Part of the groundbreaking air conditioning system is also on view. The stunning floor of the Great Hall is in very good condition, and those parts that are not are undergoing repairs. The décor of the Great Hall has lost none of its impact and no visitor can fail to be impressed by it. Exhibitions and concerts occur throughout the year and the café and shop are open daily.

St George’s Hall is FREE to visit and open every day 10am-5pm. As well as the self guided heritage trail, there are guided tours available for which there is a modest charge.

Nearby, just a short walk away, Liverpool’s Lost Castle