The church of St Thomas the Martyr dates from the early 1300s and was originally the church of the Benedictine Priory at Upholland. It was founded by Sir Robert de Holland and named after the martyred archbishop of Canterbury. Sir Robert was the secretary to Thomas, Earl of Lancaster. Interestingly there is another connection with St Thomas, as Earl Thomas ordered that Robert give the poor of Upholland both a feast and gifts on the annual St Thomas the Martyr’s day.

Here’s what they received: “20 heaped up measures of wheat flour, ox, swine and calf flesh to the value of £10.” Robert had to provide a meal of two courses for 240 poor people in the hall of Upholland, and a one course meal the next day. The food was to be served on dishes “after the manner of gentlefolk“. The poor were also to be given a pair of shoes or four shillings on their departure. This act of charity was to be done by Robert “for the earl’s soul“. Unfortunately Robert’s close relationship with Earl Thomas of Lancaster would eventually lead to his downfall, as we detail here.

The nave and aisles that we see today would have all been part of the Benedictine monastery church. The church was smaller than it is today, with the present nave acting as the chancel, housing the altar and the choir. The tower is a later addition, and the architecture around it reveals that originally the church was to be extended with two transepts either side of a larger tower, but this never came to pass, perhaps through lack of funds.  See the details in the picture below.

Instead a broad tower was constructed around 1500 which is the one we see today and is the main entrance into the church. The carvings around the outside of the doors, although weathered, are excellent, showing remnants of faces, figures and flowers.

When on the orders of Henry VIII the monastery was closed, (see here for the full story of what happened to the priory) the church was allowed to remain, as a local chapel connected to the parish church at Wigan. The rest of the priory was destroyed, although there is still a large standing wall in the Conservative Club car park that was once part of the monk’s dormitory. Other medieval remnants inside the church include a rare double piscina used for washing communion vessels, the three-seated sedila (seats for priests or monks to sit on), and fragments of medieval glass reassembled in one of the windows.

The church survived as a chapel of ease, meaning it was used for local people to worship each Sunday, saving them the walk to the parish church at Wigan. Its continual and ongoing use up to the present day means there is a wealth of interesting later historical features.

The pews have the initials of their owners carved into them, many dating from the 1600s to 1700s. At the back of the church is a large wide seat dated 1633 with the inscription “This Seat belongs to the Curate” presumably so no one had any doubt as to who should be sitting there. On one of the walls is a huge benefactors’ board that lists all those that gave donations to the poor during the 1600s to 1700s.

In the main entrance porch is a cupboard to store bread for the poor. Inscribed into it is the following:  “Thomas Prescot and Laurence Laton wardens 1720. As it is written, He hath dispersed abroad, he hath given to ye poor, his righteousness remaineth for ever, thanks be to God for his unspeakable gifts. He that hath pity upon ye poor lendeth unto the lord. Look what he layeth out it shall be paid again”. There is also a small set of wooden stocks in the porch.

The chancel, which houses the altar, was built in 1882. The mid to late Victorian windows which dominate the chancel were donated by various members of the Daglish family, to commemorate their relatives. The use of colour is stunning, the red and pink tints reminiscent of the style used by the Pre-Raphaelite Edward Burne-Jones.

In the nave is an interesting, though speculative, model of the monastic priory. It was designed by Reverend Jeffrey Fenwick, a curate at the church in 1957. The model was constructed by Harry Glover and Leonard Fowler of the local Ravenhead brickworks. There is also a small statue of St Thomas, unusually made out of brick. 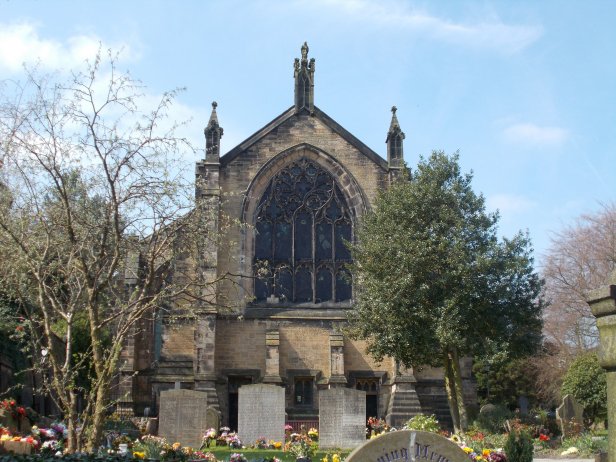 There are amongst the many  graves three that people find of particular interest. The first is just outside the door of the tower entrance way. It simply states, in a rhyme of sorts: Here underneath thow dost approach man, the body of John Smith the coachman.

Local tradition holds that the grave of Nanny Lyon dated 1804 also holds the body of George Lyon, her father. He died in 1815 and it is claimed that he was the last executed highwayman of Victorian England. A petty robber and thief, he was dubbed a highwayman because he once held up the Liverpool mail coach. The grave lies on the sloped area, opposite the White Lion Hotel. George’s name is not recorded on the slab.

Finally, there is the grand tomb of Robert Daglish. It stands at the rear of the church in an area behind high railings, but it can clearly be seen. Robert Daglish was responsible for the design of many steam engines that pumped water from the Wigan mines, and which were also used on the winding gear to haul men and coal out of the pits. He  built The Yorkshire Horse, a steam train to pull coal trucks, in 1814, making him a contemporary of George Stephenson, of Rocket fame.

For more information on the contrasting lives of George Lyon and Robert Daglish, have a look at Michael Finney’s article on the BBC website here. If the stories of graves fascinate you, the two tales also feature in Elizabeth Ashworth’s excellent book Lancashire: Who Lies Beneath? along with a host of others. See her website here.

It is really worthwhile to visit the church and have a good look around both the inside and the outside. It is open in the week for visitors to do just that, details below.

The church is open to visitors Monday to Friday 10.30-12.30 and 2.00-4.00 It is staffed by volunteers who will give you a very warm welcome. They are keen to share the historical significance of the building with the wider public.

The church also holds and annual Medieval Fair in July. See their website for more details.

St Thomas the Martyr Church Up Holland, (2006) Bessacar Publications Ltd. A children’s guide, but still informative. Available from the church.

One thought on “St Thomas the Martyr Parish Church, Upholland, near Wigan”