In the churchyard of St Wilfrid’s at Halton stands a tall imposing cross, the lower portion of which shows scenes from the Viking story of Sigurd, the dragon slayer. These key depictions put the date of the monument firmly within the Viking age of Lancashire, around the early 900s. More importantly, this is the most complete telling of Sigurd’s tale outside of Scandinavia. The story also occurs on sculptures at York Minster, Kirby Hill near Harrogate, Ripon Cathedral and Andreas on the Isle of Man. Despite the pagan story, on the opposite sides of the monument are Christian scenes, showing a depiction of a cross and perhaps a seated angel. This mix of Viking and Christian imagery was not uncommon as the Norse Vikings became Christianised.

Before discussing the individual panels, perhaps a recap of the story will help interpretation. Sigurd is what is termed a ‘Hero’ in Viking mythology and his story is told in The Saga of the Volsungs. The most famous part is where Sigurd was tasked by his foster-father Regin to recover a great treasure. The treasure had been stolen from Regin by his brother Fafnir. Since the theft Fafnir had transformed himself into a huge dragon. Regin told Sigurd that he no longer cared about the treasure, he just wanted revenge on his brother. Sigurd agreed to kill Fafnir and to keep the treasure as his reward. To aid him in this quest, Regin (who was a blacksmith) repaired Sigurd’s father’s sword, named Gram. To test it they floated a clump of wool down a stream onto the blade, which cut it into two.

So armed, Sigurd set out to kill the dragon Fafnir. He observed that every evening Fafnir came down the same path to drink water. Sigurd dug a pit on the route and hid within it. He waited for Fafnir to pass over the top and then struck its underbelly with his sword, killing the dragon.

He then made himself a feast, cooking the dragon’s heart. Sigurd touched the roasting heart and burnt his thumb. He placed his thumb in his mouth and  the dragon juices gave him the ability to understand the speech of animals. With this magic power he heard the birds warning him of Regin’s approach and murderous intent. Sigurd beheaded Regin, and kept the treasure…but unfortunately the treasure was cursed.

The Viking Age Panels on the Cross

The pictures on the cross depict parts but not all of this story. Perhaps other sections have been lost when the cross was damaged later on in its history, as we will describe below. The panels are not in chronological order, so cannot be read as simply as a modern day comic strip. Nethertheless they would have had enough detail for a person of the Viking age to know what was being outlined.

The largest panel shows two scenes from the start and the end of the story. Regin the blacksmith sits on a chair with hammer in hand (on the left hand side of the panel), repairing the sword. He is surrounded by his tools, which include two forge bellows (at the bottom of the panel). Above this scene is Regin without his head (quite faint – look for the boots), after he has been killed by Sigurd. 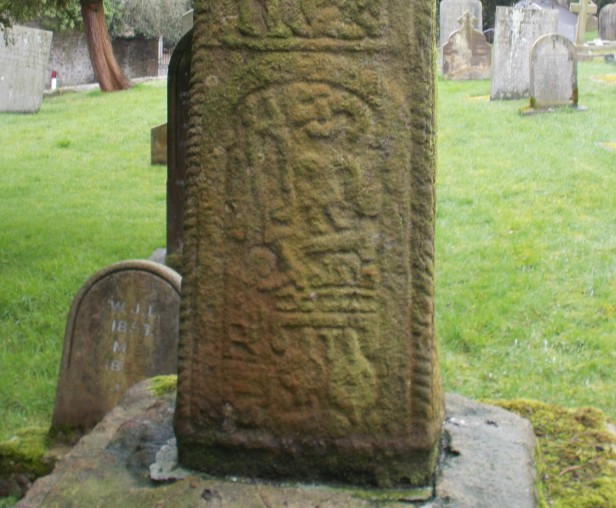 A separate panel shows Sigurd roasting Fafnir’s heart, and two birds in the trees warning him of Regin’s treachery. (See the picture below – Sigurd is the figure on the left and above him are the intertwined boughs of the trees where the faintly carved birds sit.) 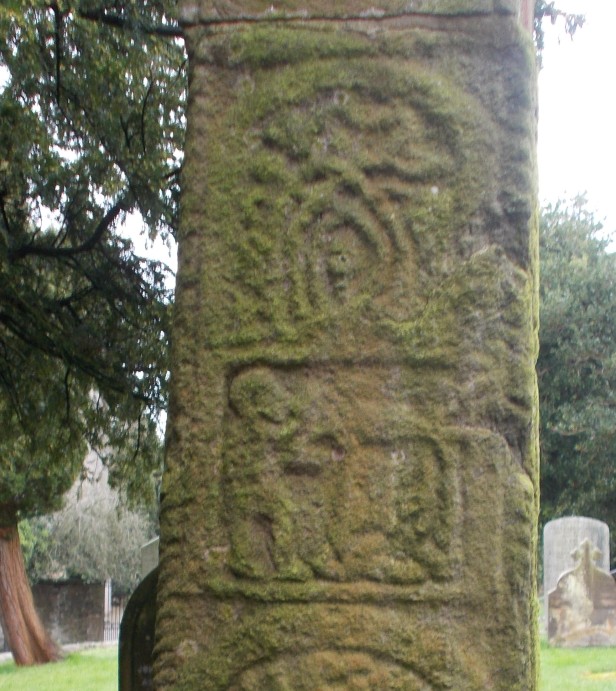 On the second side of the cross is a depiction of Fafnir the Dragon (see the top square panel below). Fafnir is actually shown as two dragons entwined, but this is common on Sigurd stones and crosses. Below this is Sigurd’s horse named Grani (which can be seen very clearly), again a common motif appearing on other monuments that feature the story. 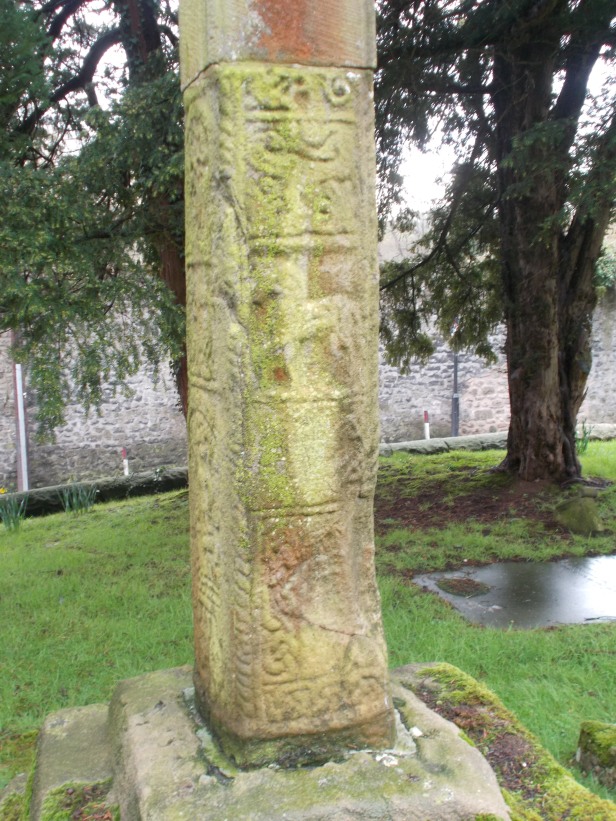 Below the horse is some decorative Viking knot work. A piece of the cross has been damaged here (see picture above), but this may have happened before the carvings were made.

On side three of the cross are Christian symbols, carved by the same sculptor that made the Viking figures. In the picture below we can clearly see a seated figure looking out at us (thought to possibly be an angel) holding a book, and two more seated figures touching his legs. Below this is another scene which shows a tall cross with two figures standing either side of it. 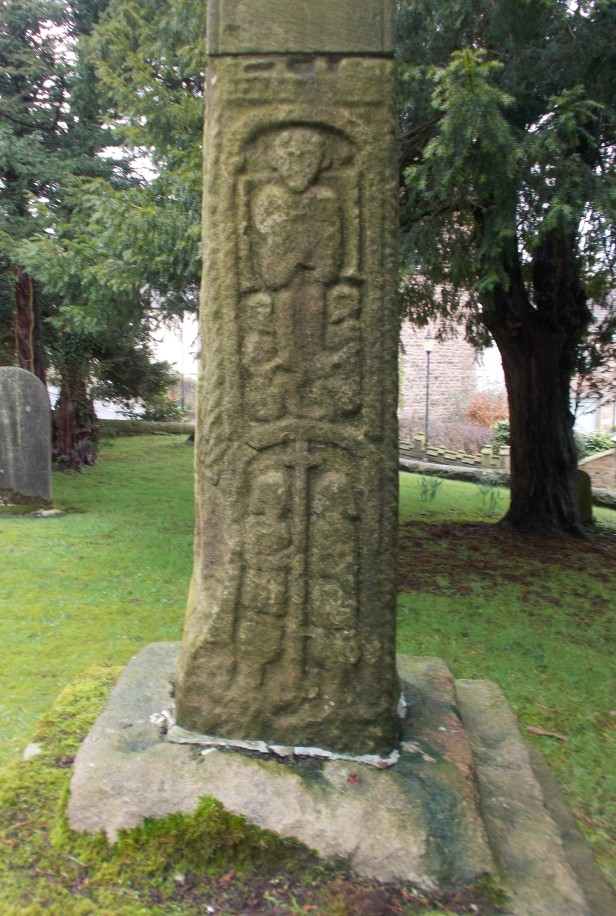 The final side has some elaborate Viking style decorative patterns of knot and scroll work and these are very well preserved, as can be seen below. Note also that the base is a three-stepped socket stone, and this is largely a Viking age innovation and is not seen earlier in England than the 900s. 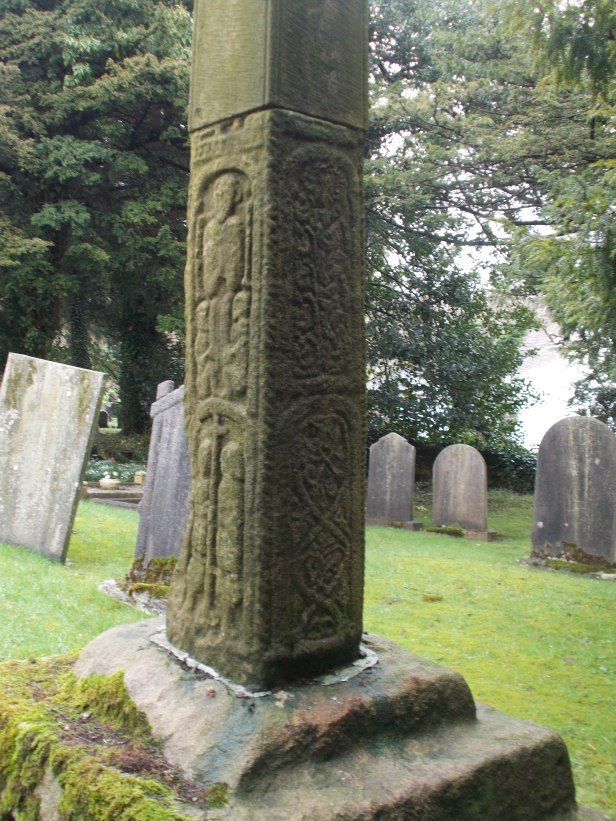 The Cross is Damaged and Later Rebuilt

In 1635, Reverend Richard Jackson, the local rector, removed the upper part of the cross. What happened to this, and whether it had more of the Sigurd story on it, is unknown. He converted the lower part (with the Sigurd story on) into a sundial.

In 1891, the cross we see today was ‘rebuilt’ using other fragments that had ended up at Halton church. The Viking age base and shaft featuring Sigurd must have been the obvious starting point. Placed on top of these at differing heights are other similar looking stonework pieces. However, the three pieces that we see today are not of Viking age, but from the earlier Anglo-Saxon tradition and date from the 700s to 800s.

Starting at the top of the monument is the actual cross shape. Only the top arm is old and it features an Anglo-Saxon plait decoration. This piece was found in the staircase leading to a room over the church.

Below this is a four sided piece that is thought to represent the four evangelists – Matthew, Mark, Luke and John – bringing the Christian gospel to the four corners of the world. Interestingly, John is depicted as part-bird and Luke part-bull, traditional symbols for them. This fragment was lying loose in the church porch in 1887, and is thought to come from nearby Caton.

Below the evangelists is a one sided Anglo-Saxon fragment featuring just the head and shoulders of a haloed figure (the lowest carved part in the picture below). 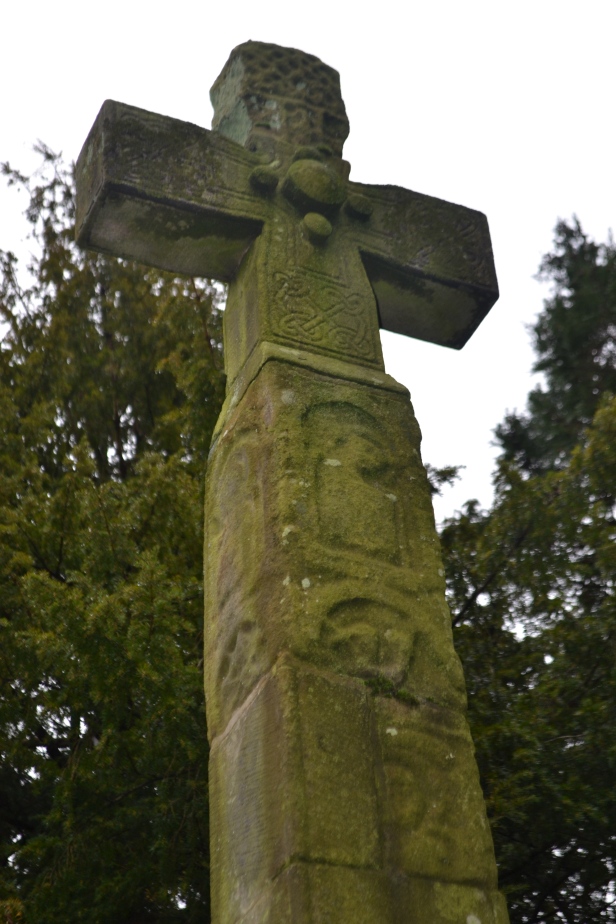 Lancaster is thought to have had an Anglo-Saxon monastery, the evidence being the large amount of sculpture and coins discovered over the years on Castle Hill (much of which is now in Lancaster’s town museum). Neighbouring locations were also important Anglo-Saxon religious sites and clearly Halton was one of them. There is also an Anglo-Saxon cross inside the church, cemented into the tower. Nearby at Hornby, there are remaining sculptural fragments from this time in the church of St Margaret (see our page on them here).

The Sigurd Cross is still impressive today, despite over a thousand years of standing in Lancashire weather. However, the carvings are quite worn in parts and difficult to see in direct sunlight. The best conditions are a low sun that casts shadows. Recently though, the Corpus of Anglo-Saxon Stone Sculpture has published online their fantastic pictures of the cross taken in low light that really allow you to see the carvings vividly. To see them click here. (Once on the Corpus website click on the small thumbnail image of the cross. This will allow you to see the excellent close-ups of all the faces if you click the ‘next’ button on the top right). The website is excellent, with not just all the Anglo-Saxon and Viking age stones in Lancashire featured, but almost all of the whole of England. Previously these were only available in expensive books, and the Corpus is to be commended on making them a free resource for everyone. (You can also view the stone cross that is inside Halton church by clicking thumbnail picture on the Corpus website here).

Professor Howard Williams of Chester University gives his interpretations of the Halton Viking age carvings, along with some pictures at his website here. To see some Sigurd Stones in Scandanavia click here.

Access
The cross is open access. The site is close to the M6 motorway junction 35. Park in the car park on Denby Beck Lane, just off the A683. Walk across the Halton Bridge over the River Lune (it’s not recommended to drive over as it is very narrow). Head up Station Road and turn left onto Low Road. Turn left at the roundabout onto Church Brow. The Sigurd Cross stands in the graveyard.

Nearby, just a short drive away

http://www.ascorpus.ac.uk/index.php The website of The Corpus of Anglo-Saxon Stone Sculpture. Complete with fantastic photography and detailed discussion on each Saxon and Viking sculpture in Lancashire and much of the rest of England

4 thoughts on “The Sigurd Cross, Halton near Lancaster”