The earliest date on record for the existence of a parish church at Poulton-le-Fylde is 1094. This was when Roger of Poitou, the major Norman landowner in Lancashire, set up a monastery at Lancaster. It was a daughter house of St Martin de Sees in Normandy, and to the monastery he gave the advowson of Poulton Church. An advowson was the right to appoint a vicar, a right that was of considerable importance. In 1196, Theobald Walter was granted land in much of Fylde and Wyre, and accordingly thought he should have the right to appoint the vicars of Preston, Kirkham and Poulton. He took the matter to court which ruled he could have the advowsons of the first two, but not Poulton which would remain the right of Lancaster Priory.

St Chad’s church prospered, and in 1291 a survey showed it to be the third richest in Lancashire. However, just over thirty years later came the devastating attack led by Robert the Bruce. (His 1322 invasion has been much discussed on Lancashire Past, for example see our pages on Furness Abbey  and Ightenhill Manor House). Poulton was especially badly hit and Bruce’s men “burned to the ground all the inhabited places in the parish and killed or carried into captivity all the inhabitants”. Church taxes were reduced in the years that followed in recognition of how little ability people had to make a living.

In 1349, the Black Death hit the region. No respecter of wealth and privilege, it killed the vicar at St Chad’s. Nearby churches at Kirkham and St Helen’s at Churchtown near Garstang both lost their priests, twice, in four months.

One of the most famous parishioners of St Chad’s was William Allen, born at Rossall Hall in 1532. Under Queen Mary Tudor’s Catholic rule he was Principal of St Mary’s Hall at Oxford University. When her sister Queen Elizabeth took the throne and set out to make England a Protestant country, he went into exile with his close friend Thomas Hoghton, builder of Hoghton Tower.  Allen secretly returned to Lancashire in 1562 and hid at Rossall, as well as at the homes of sympathetic Catholic friends. He worked to try to convert Protestants and minister to local Catholics. However, when his preaching and ministry was discovered he fled at first to Oxford and then to Norfolk. Realising he could never be safe in England, he retreated to the continent to wage a war of insurgency upon Elizabeth by a variety of means.

He founded two institutions, both named the ‘English College’, first at Douai and then in Rome. These were used to train English Catholic priests, many of which were sent back to England to give mass secretly in Catholic households. The priests were accused by the government of being spies and insurgents, and if caught were often imprisoned and some even executed. Allen’s belief that Protestantism was not a true doctrine led him to write two books inciting English Catholics to rebel against Queen Elizabeth. In a direct act of treachery, he persuaded Pope Pius V to excommunicate Elizabeth and call for her to be deposed. He also plotted with King Philip II of Spain to attack England with his armada of warships. Perhaps unsurprisingly, Elizabeth sent assassins to kill Allen while he lived on the continent, but they were unsuccessful. 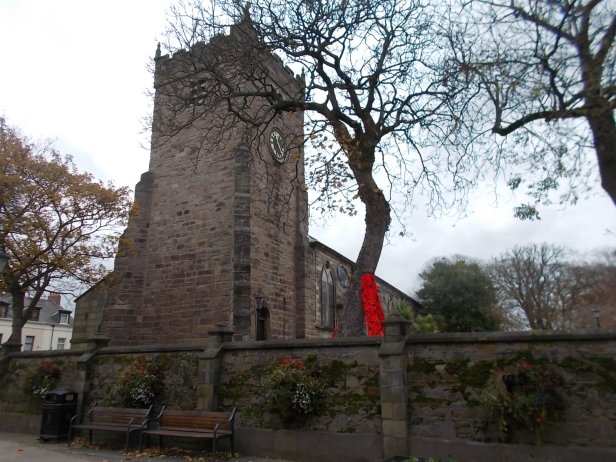 In 1587, Allen was made a Cardinal in Rome. Seven years later he died in the city, and the Duke of Sesa, the Spanish Ambassador of Rome, sent an account of his last illness to Philip II. From this we know that William Allen never forgot his home church at Poulton. The ambassador wrote “he has bequeathed in his last testament certain ornaments…to the church of the parish where he was born, when it shall become Catholic again, and meanwhile they are to remain in the English College.” The ornaments were never returned to St Chad’s, and England never became an officially Catholic country again.

In the late 1500s, Catholics in Poulton were well organised, and there were thirteen ‘safe houses’ in the parish. However, St Chad’s new vicar, appointed in 1583, was most decidedly a Protestant. Reverend Peter White was to remain at the church for over 70 years and had very anti-Catholic views.  With other local clergy he wrote a document called the The manifolde Enormities of the Ecclesiastical State in the most partes of the Countie of Lancaster. This railed against those taking part in daily Catholic masses. It denounced Catholics for having ‘popish’ feasts, festivals and bonfires. It also accused the people of Lancashire of unlawful gaming, piping and dancing on the Sabbath. Church officials were not spared its wrath, with the finger being pointed at corrupt church wardens, sidesmen and parish clerks.

Reverend White lived into his 90s and Cromwell’s Commonwealth church survey stated that Reverend White was “very aged and infirm” and “formerly an able and painful minister”.

In 1751, there was major building work done to the church.  The Medieval nave was refaced with thin ashlar blocks to give it what was considered a more modern appearance. The original Medieval red sandstone blocks of the church still exist, and were rediscovered when the ashlar blocks were removed to fit a damp course in the 1900s. Three galleries were added to increase the seating for the parishioners, and the two side galleries still exist today with their box pews. They were constructed by John Bird, John Birley and Richard Tennant, and these gentlemen got their money back by selling the rights to the pew seats, a common practice at the time. This practice only stopped in 1914 when all pews were decreed to be available for anyone to sit on, but this met with a lot of opposition from the parishioners.

However, modernising appearances did not lead to new attitudes. In 1800, Jane Breckal was forced to parade around inside the church in a humiliating manner. Clothed in white, she walked barefoot, holding a candle in each hand, “a spectacle of mirth to an unfeeling crowd”.

Inside the Church Today

One of the real gems of St Chad’s is the superb pulpit from the time of King James I. It was discovered when a new Victorian cast iron pulpit was being installed, hidden within the pulpit that was being discarded. Four carved panels survive, the fifth being lost. It is similar in design to the Jacobean pulpit at Ribchester Church, which is dated to 1636. Now restored to its former glory, it replaces the Victorian one and is used in services.

Just by the entrance door is the choir vestry. This is made from a carved oak screen dated to the 1600s which was  part of a ‘grand’ family pew. Its not completely clear which family owned such an impressive pew. The church booklet names the Fleetwoods and Heskeths who were linked by marriage in the 1700s.  However, a more recent church leaflet states it was owned by the Fleetwood and Rigby families. It features a double headed eagle, a griffin and sheaves of wheat.

Other interesting features include a huge plaque to the Hull family, which gives details of their lives. John Hull was a surgeon, botanist and author who lived in Ball Street opposite St Chads. His son John was vicar of the church in 1835. John’s brother William Winstanley Hull is described on the plaque as having an “affectionate and generous disposition” but this was not demonstrated when he campaigned to prevent people of the Jewish and Catholic faiths from entering Parliament.

The original Medieval church is hidden behind the ashlar blocks that were used to reface it in the 1700s. The tower dates from 1638 and can only be entered through a door on the outside, there being no way into it from inside the church. It contains a set of five bells that were recast in 1741, along with some more modern ones. A curfew bell is still rung every evening at 8pm from September to March. This used to be done by hand, but since 1962 it is done automatically by machine.

The Fleetwood family vault entrance can be seen at the far end of the nave. The door has scrolls either side of it and the translated inscription above reads “The arms of Richard Fleetwood Esq patron of this church Year of Our Lord 1699”. Thirty members of the Fleetwoods are buried here. The family has a long association with the church, being made patrons of it during Elizabeth I’s time, along with the coveted right to appoint its vicars.

There is a churchyard preaching cross with two old circular steps, now with a sundial on it. A font previously used within the church can also be seen by the tower.

The church is open everyday. There is ample pay and display parking in the centre of Poulton.

Nearby, just a short walk away, Poulton-le-Fylde’s Market Square Curiosities

Poulton-le-Fylde Parish Church: A Short History and Guide, Peter Fox. Revised by Christine Storey (2004). Available in the church. Printed by Ashton Printers Fleetwood. This is an excellent booklet which gives a really interesting history not just of the church, but of the social happenings and religious disagreements throughout the ages in Poulton-le-Fylde.

Welcome to the Parish Church of St Chad Poulton-le-Fylde. Leaflet available within the church.

Onsite interpretation within the church