The huge Allerton Oak is a well known local landmark within Calderstones Park. There are numerous claims made for it including: it is a thousand years old; it was the site of a Medieval Hundred Court; it was split by an explosion out on the Mersey; it was used as a symbolic message of hope during the Second World War.

Dating old trees is difficult. As they age and get larger they are in danger of being blown down in strong winds. To counter this, many trees species will ‘hollow out’. This means they rot on the inside to form a strong, tubular trunk, that can better withstand battering from gales. Hollowing is not a problem for the tree, as the living part is always in the outer layers, just below the bark. The inside wood of a tree – the ‘heart wood’ – is always inert, effectively dead. But losing the heartwood means that it is hard to date – there are no rings to count inside a hollow tree.  It is certainly old, but perhaps not large enough yet to have grown for a thousand years.

Allerton is an old place and was mentioned in the Domesday Book of 1086, when so many other places in Lancashire were inexplicably omitted. From the Norman survey we learn that ‘Three thanes held Allerton as 3 manors’. There is a long standing tradition that the Allerton Oak was the site of a Hundred Court. The concept of a Hundred is first recorded in later Saxon times, and the definition is somewhat obscure, but widely thought to mean the area covered by a hundred hides. A hide was a piece of land large enough to feed one peasant family. Another definition of a hundred is that it is an area that could send a hundred men-at-arms for a lord’s army.

In Medieval times the Hundred Court would meet once a month, often in the open air, at a local landmark. Here, justice was dispensed. Cases tried were usually private disputes over land and boundaries, and criminal misdeeds.  At first the whole community would be expected to turn out but, over time, just local landowners would attend. The Hundred Courts were presided over by the local lord of the manor, and occasionally the shire’s sheriff. It is not hard to imagine that the Allerton Oak could have been the site of such a meeting place.

The Lotty Sleigh Explosion in 1864

An explanation put forth for the splits within the tree is that they originated from the explosion of the ship Lotty Sleigh, in 1864. The vessel was moored close to Monks Ferry at Birkenhead. A steward on board the ship was filling a lamp from a can of paraffin oil, the oil accidently ignited and the cabin was set on fire. Beneath the cabin, in the hold, was stored eleven tons of gunpowder. The crew rapidly realised that they could not get the fire under control and were in immediate danger. Fortunately, they were able to flag down the Wasp,  a passing ferry steamer, and safely board her.

The Lottie exploded and a contemporary report from the next day in the Liverpool Mercury states “the most solid blocks of warehouses, offices, and private dwellings were shaken to their base, doors locked and bolted were thrown wide open, thousands of squares of glass were smashed, to add to the alarm, the entire line of lamps through the greater portions of the street were extinguished…” This was not just on the Birkenhead side of the Mersey, it affected Liverpool town centre too. The article gives a street by street report on broken windows and smashed shutters for central Liverpool. Broken windows were reported as far away as Toxteth at the time. There was no mention of the Allerton Oak suffering damage, but this report was filed the day after the explosion and so cannot be expected to be completely comprehensive. The sound carried as far as St Helens, Runcorn and Chester, where the authorities from the latter telegraphed those in Liverpool to see what had happened. Incredibly, no one was killed by the blast or the resultant damage to buildings.

It is unlikely that the shock wave split the oak. Many old trees, in the process of hollowing out, end up with split trunks. A contemporary account claiming that the oak had been split would settle the matter, but none seems to be forthcoming.

The Allerton Oak as a Symbol of Hope

Charles and Henry MacIver,  brothers and shipping magnates, sold the Calderstones estate to Liverpool Corporation in 1902. It opened as a park three years later, and has been in the care of the local authority ever since. In 1907 the first metal crutches were put in place to hold the massive branches in place on the tree. The sheer size of the limbs meant that they were in danger of breaking off.

During the Second World War, Allerton Oak leaves and acorns were sent to soldiers fighting on the battle front in Europe, to remind them of home. Remarkably, a Christmas card found in the archive of Liverpool City Council shows that it was part of a concerted effort, organised by the Liverpool Corporation Parks and Gardens Department. It was part of what was termed the ‘Staff Gift Fund’.

The card states: With Sincere Greetings and Best Wishes for the New Year from your workmates and friends

There then follows a verse:

Not all the storms of centuries

Have bowed the British Oak;

Nor shall the wiles of evil men

Here in the soil of England

I mock the winds that blow

My arms shall wave for freedom

It is not clear who wrote this, but it is attributed to ‘H.O.J.’

A leaf is attached with the words  ‘This is an OAK LEAF from 1000 year old Allerton Oak’.

Some have speculated that acorns may well have been planted on the European soil, and the Allerton Oak has descendants abroad. 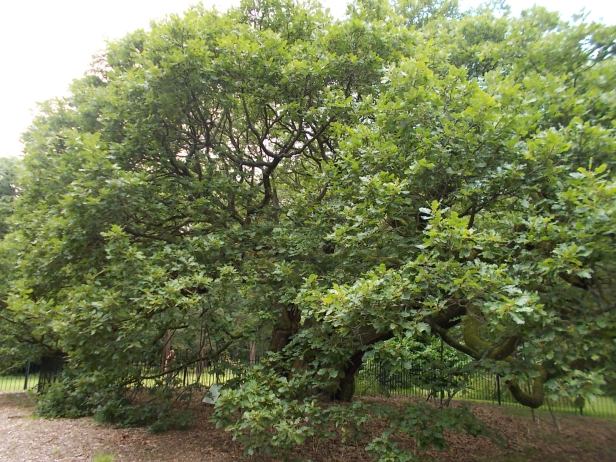 The Tree in Modern Times

Jon Warren has cared for the Oak for 50 years, and holds the position of Lead Gardener. He notes that despite the fact that it has had its share of disease, it always pulls through. Upon it grows moss, lichen and ferns. Woodpeckers, tawny owls and spotted doves have been seen on its boughs. In 2007, Jon planted an acorn from the tree, and has dubbed the offspring ‘Allerton Oak the Younger’. The two trees are the only two Sessile Oaks in the park. In the UK we have two native species of oaks. The commonest is the Pedunculate species, with the Sessile being a little rarer. The word ‘Sessile’ means ‘stalkless’, as its acorns grow straight from the twig and have no stalk, whereas the Pedunculate acorns do have a stalk.

In 2019, the Allerton Oak won the Tree of the Year competition, run by the Woodland Trust. It was then entered for European Tree of the Year, and came 8th of 16th – better than most of our Eurovision entries! To see Jon speak about the tree in a short two minute video, click here. The trees in the European competition also have short fascinating videos, and to see them, click here.

Liverpool City Council and Mersey Forest have invested £80,000 in a new propping mechanism for the tree limbs. This system will be flexible enough to be modified as the tree grows for years to come. The oak is fenced off, not just to stop people swinging on its boughs, but to stop trampling of the ground around it. When soil is heavily compacted, it is very hard for rain water to filter through to the roots. Tree root systems are not as extensive as is commonly thought – many people believe that there is as much of the tree below the ground as above, but this is a myth. A tree is often doing a delicate balancing act with a fairly shallow root system that is often close to the surface to collect that all-important rain water.

Large ancient trees are rare within our region. In any season, this is a tree worth seeing.

The Allerton Oak stands in Calderstones Park, Allerton in Liverpool. It is a short walk from behind the Mansion House. Download a map from The Reader here.

There are free car parks on Calderstones Road and Yew Tree Road.

One thought on “A History of the Allerton Oak, Liverpool”