In 1606, Cuthbert Clifton bought the site of Lytham Hall and 5,500 acres of land from the Molyneux family.  He ordered the old manor house to be levelled so that he could have a new one built. This Jacobean house still exists today, connected to a later Georgian hall.

In 1752, Thomas Clifton had a new house begun, which is the imposing one that greets visitors to the site today. Taking 12 years to construct, this Georgian building was designed by John Carr of York. He used  a style mimicking the Italian 16th century architect Palladio, with an emphasis on symmetry and design inspired by ancient Greece and Rome. Carr also worked on Towneley Hall near Burnley.

The Cliftons became an increasingly wealthy family, in fact one of the richest in the country. By the 1800s, they spent little time at Lytham and the estate was managed in their absence by trustees and land agents. Of the later family members, notable was John Talbot Clifton. When he was seven years old, he laid the foundation stone for a new hotel which was to be the beginning of a new settlement called St Anne’s-on-the-Sea and throughout his life he was seen as a benefactor to Lytham and St Annes.  Well travelled, at thirty-eight, he married Violet Mary Beauclark, who he met in Peru.  He died in 1928, on expedition to Timbuktu.

But it was their son, Harry (Henry Talbot de Vere Clifton), that led to the unravelling of the estate and family fortune. Inheriting everything before the age of 21, he began a life-long spending spree, disposing of the family wealth. His lavish expenses included keeping permanent suites at the best hotels. In 1935, he was visited by his friend the author Evelyn Waugh. The novelist described the house as “very beautiful” but the Cliftons as “tearing mad…all sitting at separate tables at meals.” Some sources claim that Harry was part of the inspiration for the ill-fated Sebastian, in Waugh’s classic Brideshead Revisited.

By 1957, Harry’s rising debts meant the house could have been repossessed. To prevent this, his mother  Violet, who had not been resident for some years, returned to make sure the house was permanently lived in. She had been living under the name Sister Seraphim in a Poor Clare’s convent in Sussex.  After her death, Harry sold the hall and parkland to Guardian Royal Exchange Assurance. In 1978, he sold the title ‘Lord of the Manor’ and died a year later, leaving a mere £30,000 in his will, a fraction of what he had inherited.

The hall and surrounding parkland had been bought by Guardian Royal Exchange Assurance back in 1963. The organization proved to be a  good steward, restoring and maintaining the property. In 1996 the hall became available again to buy and the Lytham Town Trust stepped forward to purchase it for the local community. It is now leased to the Heritage Trust for the North West who will undertake to further conserve it and develop the park and hall as a tourist attraction. 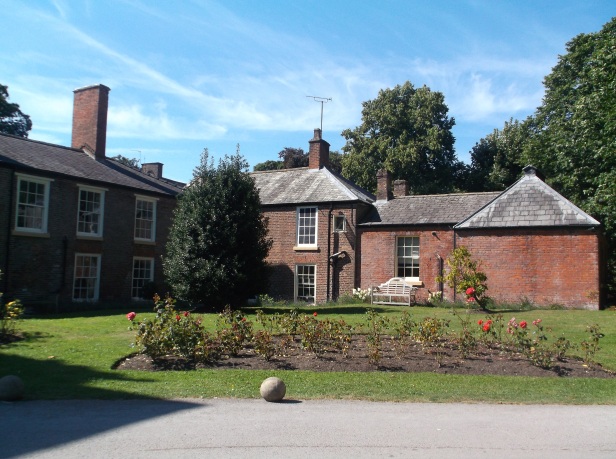 So, on visiting this Grade I listed building today what is there to see ? Both the Georgian and Jacobean parts are open to visitors and there are a large number of rooms to view. On viewing the exterior of the Georgian part, symmetry is a key feature.  The same number of windows can be seen either side of the entrance way. This pattern  is preserved  on each face of the Georgian hall by having a number of dummy windows that have no counterpart on the inside. Likewise some of the interior rooms feature both real doors and their dummy counterparts that cannot be opened, but preserve the symmetry of the rooms.

Much of the Georgian house interior is designed in  the rococo style from the 1700s. This used curving patterns with rocks, shells, flowers and scrolls. Lavish use of mirrors and  Stucco plasterwork (a decorative lime plaster) are also a feature of this style. Incredible ceiling plasterwork  can be viewed in the Entrance Hall and in the Staircase Hall, the latter boasting a spectacular piece featuring Jupiter, lord of the gods at its centre.

The stunning Drawing Room features  Gillow console tables each supporting a  huge ‘pier glass’  (a large tall mirror masking the wall between two windows). Gold dominates the room, covering the tables, the edges of the mirrors as well as the wall panels which are hand stencilled with gold leaf.  Gillows furniture can also be seen in other rooms- the Entrance Hall has Gillow chairs and the Dining room features a large Gillow sideboard and huge curtain rail.

Upstairs is the  Long Gallery from the earlier Jacobean hall, common to houses of that era. The room would be where the ladies of the time would walk up and down to exercise in bad weather. During World War 2 the Long Gallery was converted into a convalescent hospital ward for the military. The upstairs bedrooms and furnishings give a more intimate feel of the hall in its later years, reflecting the tastes of John, Violet and Harry Clifton.

The 78 acres of Grade II historic parkland is being restored. The woodlands are being managed, new trees planted and paths cleared. Of particular interest is the restoration of the Mount from the 1700s. This was used as a viewing platform, giving vistas over the estate to the sea. In it’s time it even had an icehouse built into it.  Today new steps have been put in, so that visitors can climb up it once again. A restoration of the Italian style garden and Kitchen garden is also underway. The dovecot with its 850 nestboxes will be a future project.

Lytham Hall and grounds are a hugely  important Lancashire site, which for so long has been on the  ‘heritage at risk’ register but is now well and truly open for all to enjoy. Some say that the hall is the finest Georgian House in Lancashire- why not visit and see for yourself.

House Open: Every day except Saturdays (April to November). There is a charge to enter.

Parkland Open: Every day. Free to enter, but there is a car park charge.

Just a short walk away The Witch’s Grave

Lytham Hall Website www.lythamhall.org.uk Visit this for all the latest news and the opening times.

Heritage Trust for the  North West  website www.htnw.co.uk  Have a look at the excellent work this organization is doing throughout our region.

The historical information for this blog post is drawn from the following publications:

Lytham Hall and Historic Park, Dennis Leyland, undated, Heritage Trust for the North West,  booklet currently in print as of 2016 and available from the house

Lytham Hall: A brief tour of the house and grounds, leaflet, undated, currently in print as of 2016 and available from the house

7 thoughts on “A History of Lytham Hall, Lytham”