In Bolton town centre stands a larger than life statue to the late, great steeplejack Fred Dibnah next to a Corliss Steam Engine. Fred always said that he was a man born in the wrong time, that he should have lived in the Victorian age. He was a tireless promoter of all things steam, and it is fitting that his statue has been placed next to this Bolton built steam engine.

Fred’s occupation as steeplejack involved repairing chimneys and church spires. He was the first to note the irony that although he had grown up wanting to preserve the great mill chimneys of Bolton, he ended being the man who was paid to demolish so many of them when they had come to the end of their useful life. His great skill in repairing church steeples and fitting them with new weather vanes means that we can still see his work in the Lancashire landscape around us today. His repairs to Bolton Parish Church gave him the publicity he needed to launch his steeplejack career in the 1970s.  This work carried on until the end of his life when he worked on the third tallest spire in the country, that of Preston’s St Walburge’s Church  (see our page on the iconic church here).

Following his death in 2004 it was decided to erect a statue in his honour, by public subscription. Thousands of individuals gave money, along with differing organisations and companies. In total more than £45,000 was raised by the Bolton Civic Trust. 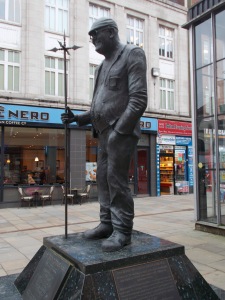 His statue stands in Oxford Street and was created by Knutsford based figurative sculptor Jane Robbins. One of the four plaques at the base sums up his life as “Steeplejack and demolition expert, intuitive engineer, steam enthusiast, devotee of industrial heritage, raconteur and television celebrity, revered son of Bolton, 1938-2004”

When we viewed the statue on a busy Saturday in Bolton, we were pleased to see other passers by admiring it and photographing it too. One curious point jumped out at us: Fred’s waistcoat and jacket are buttoned on the “wrong” side, that is on the left. By convention men’s buttons are on the right, but Fred’s are clearly on his left. He is in good company here as the buttons on the Robert Peel’s statue in Bury are also on the left. The reason for this anomaly has been explained by the sculptor Jane Robbins. She had listened to Fred on one of his television programmes narrate the story of how a sculptor had killed himself after he realized that a statue he’d created had the buttons on the wrong side. (This is a well known historical myth, told about statues around the country). Jane purposely put the buttons on the left side and has been quoted as saying “… I thought it would be a sort of nod to the man- a kind of ‘in’ joke for Fred.”

Fred wasn’t the first famous Lancashire Steeplejack, he had a Victorian predecessor who lived in Ramsbottom and for more details see our page here.

Behind Fred’s statue stands the mighty Corliss Steam Engine. Built in Bolton in 1886 it was in use until 1969 in a silk spinning mill owned by Ford, Ayrton & Co in Bentham, North Yorkshire. It was donated to the people of Bolton by the manufacturers Hick Hargreaves & Co Ltd of Bolton. It represents a typical steam engine that would have powered so many of the mills throughout our region.

The original Corliss steam engine was invented in 1849 by George Henry Corliss of Rhode Island, America. He managed to create an engine that was 30% more efficient than conventional ones. This was an important breakthrough as it meant that for the first time steam power became more economical than water power. This in turn meant that factories no longer had to use water to turn their wheels, but could use a steam engine and so be built anywhere- not just next to a suitable river. The Corliss engine was ideal for textile mills as it had adjustable speed and power, which is useful when dealing with being connected to machines for the spinning of delicate thread. 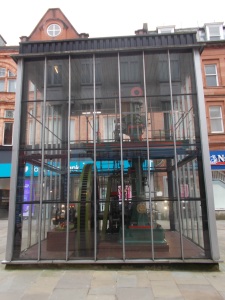 The Bolton engine was placed in its huge glass case by Bolton Corporation when Oxford and Newport Streets were pedestrianized in 1973. There are great views of the machine on all four sides of the case. In our youth we remember the engine’s large wheel turning on a Saturday, but have not seen it rotate in recent years. It is clearly being maintained though as an oil can rested on one side and an oily rag had been carefully stowed on the other.

Site visited by A. and S. Bowden 2018. Thanks to our Bolton correspondents Ste and Sue.