The site of Liverpool Castle is clearly marked by a plaque on the Queen Victoria Monument in present day Derby Square. There are no standing remains of this medieval fortress. However, it had a rich and interesting history and if you are prepared to travel away from Liverpool, there is a way you can still see what the castle looked like, but more on this later…

King John wanted a port town that he could use as an alternative to Chester. Chester was held by a wealthy Earl who kept most of the revenue it generated. John had the idea that he could set up an alternative trading city and port, both of which would generate taxes that he could collect. More importantly to him, he could build a staging post to be used to launch attacks on Ireland. The Mersey had an inlet called ‘the Pool’ which would be a safe harbour for trading and war vessels. In 1207, he issued a charter creating the borough of Liverpool and the trading town was born. Liverpool was not his only interest in Lancashire as he was involved in further improving Lancaster Castle (for more details see our page here).

Above the Pool was a rocky promontory, which was an ideal foundation for a castle. This was built not by the king, but by William de Ferreres in 1235. Set out as a square, it had large circular towers at three of its corners. On the fourth corner was an imposing gatehouse. A strong surrounding wall connected the towers, protecting the buildings inside the castle. Within the walls were a hall, chapel, brewhouse, bakehouse and covered well. A causeway from the gatehouse ran over the moat and into Castle Street.

The wealthy Molyneux family became the owners of the castle and would hold it for many years, along with the title of ‘Hereditary Constable’. The powerful Stanley family lived in a fortified house close by on Water Street called The Tower.  The two families would exert an enormous control over the lives of the inhabitants of Liverpool.

The castle did not have a standing army, but it could hold a garrison if the need arose. In 1323, the castle’s financial accounts stated that it could hold a garrison with  ‘186 pallet beds, 107 spears, 39 lances, 15 catapults and other engines of war’. Just four years later, the Constable of the castle was ordered not to receive an army, but refugees fleeing from the Scottish and Irish wars.

Just over two hundred years later, a Royal Commission stated that Liverpool Castle was in a poor state. The three round towers and gatehouse did not have full roofs left and the walls needed repairing. When the work was completed the West Derby Wapentake Court was to be held there, and its records stored on site. This was all duly done.

During the Civil War, Liverpool was a divided town. Most of its citizens were Protestant and sided with Parliament, while the Catholic Molyneux and Stanley families sided with the King Charles I. The Stanley’s Lord Strange seized and held the town magazine ammunition store for the Royalists and a Royalist garrison was placed in the town.

The next year, Liverpool was captured by Parliamentarians. They set up huge mud wall barricades, strengthened the town gates and put cannons around the castle and on ships in the harbour. All this did not prevent the king’s nephew Prince Rupert from attacking and wining the town back for the crown. He then had elaborate plans drawn up by the defence architect Bernard de Gomme to upgrade the defences of the castle. These designs were never realized and the next year Parliamentary forces once again captured the town.

Conflict between the Aldermen and the Landed Gentry

Because Liverpool was set up as a trading town, there was always a tension between the established rich families of the Molyneuxs and Stanleys and the town’s aldermen (representing merchants and traders) over rights, taxes and governance. The Molyneux’s castle and the Stanley’s tower were seen as their very visible power bases.

In 1632, the First Viscount Molyneux, Earl of Sefton, bought rights from the king to enable him to act as Lord of the Manor for Liverpool. This aristocratic grab allowed him to have rights over the common, waste (rough grazing ground), river and tolls. This increase in his power made the aldermen of the town’s corporation very unhappy.  In 1668, Caryll Molyneux wanted to lay out a new road and bridge across the Pool from his orchard next to the castle, but was opposed by the merchants and aldermen. After some delay he did get this built, but in doing so was forced to sell his rights for the next thousand years for thirty pounds. 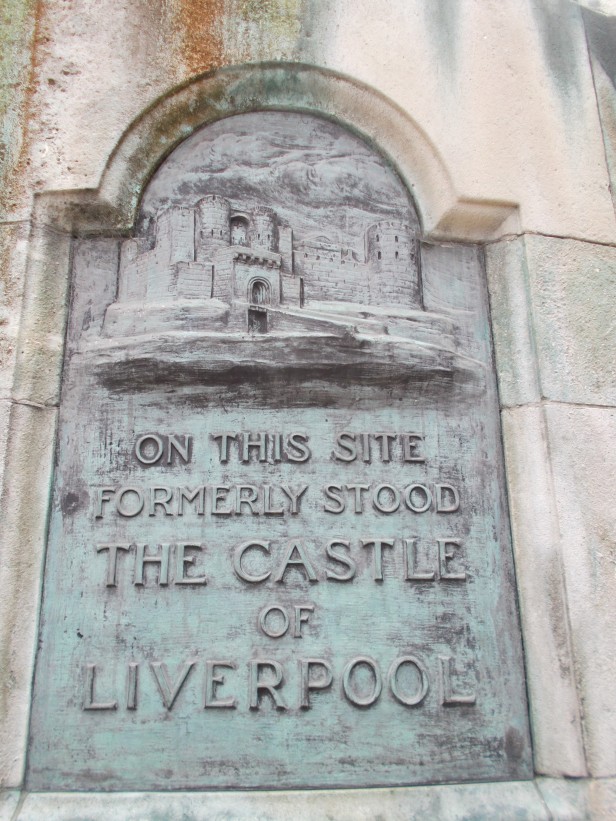 By 1700, the aldermen of the corporation had purchased the annual lease on the castle and within twenty years had managed to get the full rights to the site, including the right to demolish it. The castle was now in ruins, its moat had been filled in and a new market was set up within its vicinity. However, Lord Molyneux contested the corporation’s rights, claiming his own as Hereditary Constable of the castle. This led to years of wrangling in the courts, with Lord Molyneux the eventual loser. In 1726, the last of the remains were pulled down so that a new church dedicated to St George could be built. From the time of its completion a few years later, the town’s aldermen would parade every Sunday from the town hall, down Castle Street to the church. They had vanquished the Molyneux’s powerbase for ever.

A similar fate awaited the Stanley’s tower. The corporation first managed to get the lease on it in 1739. It functioned as the town’s gaol with some of the upper rooms used for meetings and entertainments (there are echoes of this strange dual function in the later Victorian St George’s Hall, see our page on this amazing building here). The tower finally closed in 1811 when a new gaol opened, and was demolished eight years later when Water Street was being widened.

It’s a pity that nothing now remains of Liverpool Castle. However, there is still a way to get a sense of what it would have looked like in its later ruined days. Lord Leverhulme built a Liverpool Castle Replica on his estate at Rivington, and it can still be visited today, for free. We’ve written a page on it here.

The site of the castle is marked on the Queen Victoria Monument in Derby Square.

Nearby, just a short walk away St George’s Hall

If you’re interested in another stronghold of a much later date, have a look at our page on Lancashire at War on the underground control centre Western Approaches here