Standing on Station Road in Kirkham is the town’s last loom. Made just after the first world war, it was in use continually until 2003. This was a sophisticated piece of machinery.  Earlier power looms could only be used to make plain fabrics, but this is an example of a crossrod loom. Tappets on the left hand side were used to make a range of fabrics including velvets (closely woven fabric that has a thick pile on one side), satins (smooth glossy fabric usually made of silk), twills (which have a pattern of diagonal parallel ridges) and Bedford cords (similar to modern day corduroy).

Kirkham has had a long history in textiles. In its earliest days, production would have been on handlooms. The handloom weavers’ cottages still stand on Preston Street (the main road through Kirkham) dating from the early 1800s. The cottage industry extended to making sail cloth by the 1830s, but by mid-century much of the textile production had  shifted to factory power looms owned by wealthy families such as the Birleys, Langtons, Hornbys and Shepherds. These would have been very intensive centres of production. The weavers would have tended 3, 4 or 8 looms each. Their overlookers (or tacklers) had sets of 72 or 84 loom operators to manage. 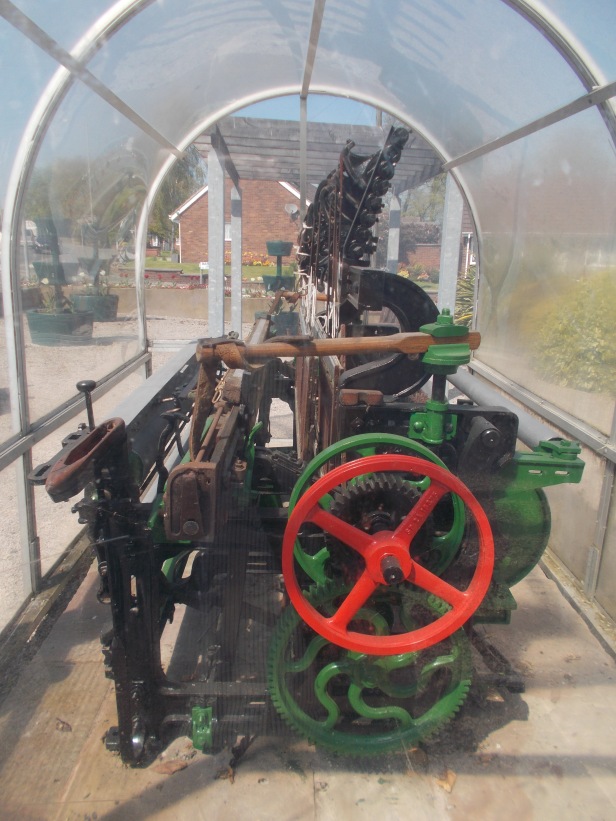 John Birley built a flax mill in 1861 and flax was grown locally in fields nearby; its blue flowers would have once been a familiar sight in much of the surrounding countryside. At its height Kirkham had 11 mills, the last one being built in 1915. Today, Kirkham’s Last Loom stands in isolation on Station Road, a remnant of a bygone era for the town.

Nearby, just a short walk away:

Wrea Green Windmill and the Dub

5 thoughts on “The Last Loom, Kirkham”