Just outside the Corn Exchange on Lune Street in Preston stands the Martyrs Memorial. It commemorates the sacrifice of workers in their struggle for fair pay and democratic rights in a time when most had access to neither. The flashpoint that occurred on 12th August 1842 led to the deaths and serious injuries of some of the crowd gathered on Lune Street. To understand why it occurred, we have to look at events leading up to the protest. 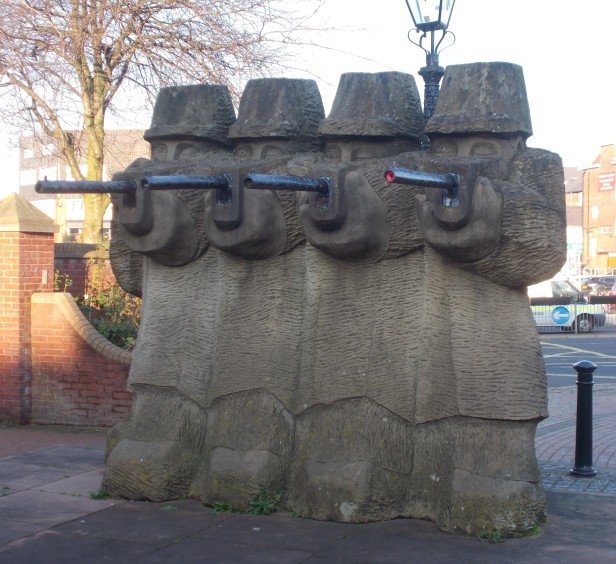 In 1842, the Chartists’ Second Petition was presented to Parliament. One of its main requests was the right for all men to vote. The petition carried over three million signatures, but was thrown out by Parliament in May of that year. Anger swept the nation and, coupled with a recession which had forced a 25% cut in wages, protests broke out in the industrial towns.  A General Strike ensued, as did what has become known as the Plug Riots. These started in July and by August the movement had reached Lancashire. The strikers went from factory to factory removing the plugs from the steam boilers so that no work could be done. They also encouraged the factory workers to join their strike.

On Saturday 13th August, the protestors met up at Chadwick’s Orchard (now the site of Preston’s covered market) at 6 o’clock in the morning. They proceeded to Sleddon’s machine shop and shut it down before carrying on to other local factories. By 8 o’clock they gathered at the bottom of Lune Street Brow. The military and police blocked Lune Street higher up (near the Central Methodist Church).

A stand off between the authorities and the protestors began. Mayor Samuel Horrocks Junior and John Bairstow (a magistrate and mill owner), tried to reason with the crowd. The protesters were in no mood to listen and refused to disperse. Women and children had brought up stones from the nearby canal wharf, which the men began to throw at the police and military. Mayor Horrocks read the riot act and was hit by stones as he did so. Captain Woodford moved forwards looking like he was about to arrest someone. He was knocked to the ground and a constable trying to help him was struck by a stick on his arm and had stones hurled at him, which hit him on his chest and face.

With the police increasingly being beaten back by the stones, the crowd were warned that they would be fired upon. Some of the protestors were able to go up Fishergate and get behind the police and military and, in this increasingly tense situation, the order was given to open fire. At first onlookers thought that blanks were being used, but twenty live rounds were fired. This resulted in four deaths and numerous injuries, three of which were very serious.

On Monday, several factories broke the strike and reopened, but the incident was not over yet. On Wednesday, a mob approached that had been active in Wigan and Chorley. They were a mixture of railway navvies, coal miners and weavers, armed with knives and bludgeons. They were able to stop mills at Farington, Bamber Bridge and Walton le Dale. At Withy Trees Mill they broke 1300 panes of glass.

The Preston authorities were ready for them and the Ribble bridges were guarded by both the police and military. Thomas Batty Addison, the Recorder of Preston, gave the orders for the mob to be dispersed and this was done by the police force, under the watchful gaze of the military.

The inquiry from the Lune Street confrontation ruled that the killings had been lawful. A total of 96 people were arrested for the riots in Preston, and some Chartists distanced themselves from the incidents.

On the 150th anniversary of the killings, a memorial was unveiled in memory of the event. Designed by Gordon Young, it is inspired by Goya’s famous painting The Third of May 1808 showing French Napoleonic soldiers firing on defenceless Spanish men. (To see and learn more about this painting, have a look at the Khan Academy page here).

The monument on Lune Street is dramatic and stark. Plaques on its base give some of the history and the reasons for creating the monument. Here is some of what is written:

This plaque is dedicated to the memory of those workers who were shot and killed on or near this monument on Saturday 13th August 1842 during the Chartist led strike in order to secure a fair day’s pay for a fair day’s toil.

This plaque is dedicated by the trade unions of Preston to the memory of all workers worldwide who are killed, injured, or suffer ill health or detriment as a consequence of work. Remember the dead, fight for the living.

The Preston Martyrs Monument is on Lune Street, Preston town centre. It is open access.

Nearby, just a short walk away

Just a short drive away

The Wharncliffe Companion to Preston: An A to Z of Local History, David Hunt (2005) Wharncliffe Books