In 1094, Roger de Poitou was the owner of most of the land in Lancashire. He founded Lancaster Priory, next to his newly built Lancaster Castle. He also endowed the monastery with thirteen churches to support it, and the church at Bolton-le-Sands was one of them.

Lancaster Priory was a daughter cell of St Martin of Sees in France, and so Bolton-le-Sands Church was ultimately under St Martin’s control. This ended in 1250 when the monastery forfeited its ownership of Bolton-le-Sands, in return for control over Poulton- le-Fylde Parish Church.

In 1326, a vicarage was endowed to the church along with seven acres of arable fields, one and half acres of meadow and a grove of trees with a croft. The land, along with the profits from the sale of honey from bees, were all given to the vicar as part of his living by the Archdeacon of Richmond, Robert de Woodhouse.

Some of the oldest artefacts in the church are the rare Viking age stones and the Medieval grave slabs, discovered during Victorian restorations. For a full discussion of the Viking age stones, see our page on them here. The two most intact Medieval grave slabs are of particular interest, one is large and the other one is small. Both have simple crosses on. The large one has a simple engraving of a medieval long sword with a round pommel. The sword indicates it belonged to a male with the right to bear arms. The smaller grave slab was the marker for a child, and the engraved shears on it means it was a female. Although simple in design to our modern eyes, these are high status items, probably belonging to a land-owning family. 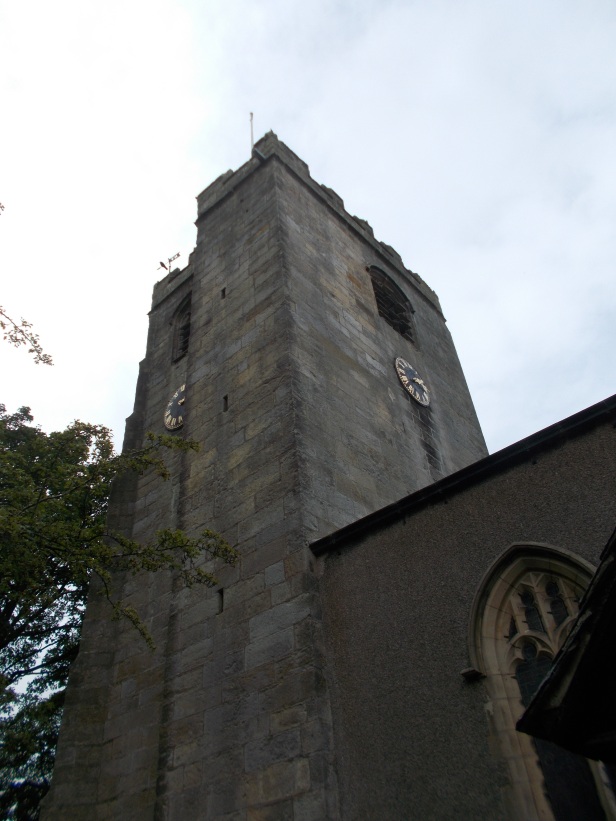 In the 1400s, the present church tower and the arches and pillars in the nave were built. Apart from one of the bells, these are the only remaining fabric of the Medieval church left today. The bell was cast at the foundry of Richard Mellour of Nottingham and has a Latin inscription stating “May this bell be sanctified by the Holy Trinity”. It bears the effigy of St Andrew on the cross, and the motifs of a lily (the sign of Mary), a rose and a shield.

The other two bells that remain today were in place by 1552. The Treble Bell is inscribed “Glory to God in the highest” in Latin and was recast in York in 1724. The work was done quickly, the bell being returned within eight days.  We know that carter James Garrett was paid £5 for navigating it over the difficult terrain between York and Bolton-le-Sands.

Towards the end of the 1500s and into the 1600s were times of religious turbulence. There are records of services being disrupted in 1595 and violence towards the vicars of Bolton-le-Sands and nearby Warton. In 1649, the incumbent vicar Henry Compton was imprisoned in the Tower of London, charged with supporting King Charles in the Civil War and with being a Catholic.

A large grave slab surviving from this era, displayed within the church, is an interesting remnant. It states: “M Robert Cole of the Coate. He lives intombed heare. It is supposed that he lived above 100 yeares. But impartial death that spareth no degree hath now inthrald him heare in his captivity where he must sleepe until the trumpet sounds on hy when all must arise to judgment ith twinking of an eye. O then remember death. Wee must to grave or clay. Life paseth like smoke that vanisheth away”.

In 1734, some parishioners, unhappy with their seats in church, applied for permission to build a gallery at their own expense “wherein to sit, kneel, hear and attend Divine Service and Sermons”. This piece of building work seemed to be the last for quite some time, as during his tenure as vicar James Thomas (1769-1824) allowed the church to become badly neglected and in need of repair. He did not reside in the village and had several other livings to support him. Interestingly, during this time the nearby well of St Michael’s was used for baptisms, and not the church font. This occurred first in 1779, then 1780 and finally in 1783. Things had got so bad by 1812 that the bishop asked the vicar of Kendal to do an inspection. He declared the building “to be in a very bad and dangerous state” and suggested that all but the Medieval tower and arches and pillars in the nave should be pulled down and rebuilt.

The vicar of Kendal’s recommendations were taken seriously and the church was rebuilt and renamed as St Michael’s, but it was not quite the wholesale demolition he intended. New large, wide windows were put in on the north and south sides, as the previous church had been very badly lit. A new gallery replaced the previous one. Not everyone approved of the work though. Local antiquarian Dr Whitaker, author of the History of Whalley, did not like the “new barn-like slate roof”.

The seating inside the rebuilt church continued to be a problem. Forty-eight private family pews were listed in the accounts, but the parishioners were not happy about the lack of public seats. This meant that, ten years later, there was more major building work, with a transept built on the north side of the church to house nine private pews and seven rows of free seats. The owners of the private pews also had burial vaults constructed beneath their pews in the vaults below. An outside door led to a central passageway, with doors opening into each vault.

A local parishioner, Mr. Berry, paid for a replacement clock in the tower in 1837. The Lancaster Guardian stated “the close proximity of Bolton church to the great north road must render the truly liberal gift no less useful to the traveller and wayfarer than to the inhabitants of the village where Mr Berry resides”. The clock is still in use today.

More seating grumbles occurred following the 1880s building work. The gallery was removed and extra seats were added in the north aisle, but people were not happy as some of the private seats were removed and Pitch pine pews put in. Colonel Green of Slyne, who had contributed to the alterations, expressed his concern about how he would provide enough seats for his family and tenants. The Churchwarden dismissed these views and “expressed the hope that everyone would be able to find seats approximating to their former positions. He stated “ The church is now so neat, and dry and comfortable, and one of the handsomest village churches in this neighbourhood”. Visitors today can attest to the fact that this is still the case.

The Church is open everyday. See their website here

Do visit St Mary of the Angel’s church on the same street, for a contrasting interior.

Nearby, just a short walk away Bolton-le-Sands Free Grammar School